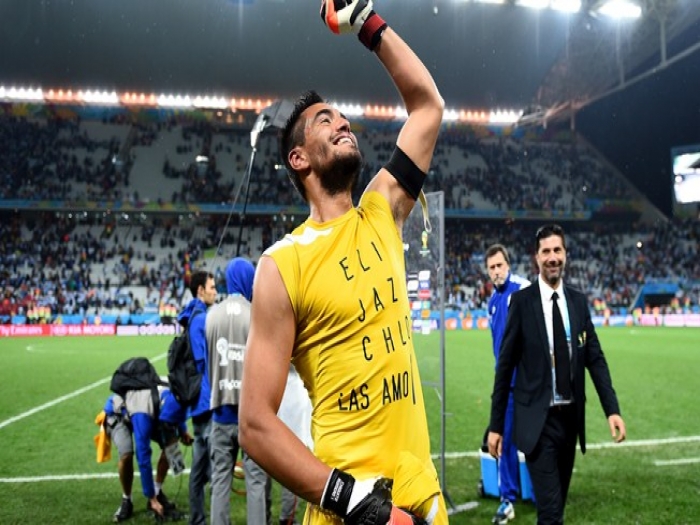 Sergio Romero inspired Argentina to a 4-2 victory over the Netherlands on penalties and FIFA World Cup™ Final place for the first time in 24 years.
After 120 goalless minutes in Sao Paulo, the 27-year-old repelled Ron Vlaar’s spot-kick before making a stunning save from Wesley Sneijder to send La Albiceleste into a showdown with Germany at the Maracana.
The first half was a tense, chance-shy affair. Lionel Messi had Argentina’s best opportunity, with a centrally-positioned free-kick from the edge of the box, but he curled it straight into the arms of Jasper Cillessen.
Ezequiel Gonzalez bravely ducked his head between flying boots from a corner, but the 27-year-old centre-back was unable to keep his effort down, while the sliding Ron Vlaar did well to intercept a low Ezequiel Lavezzi cross before Gonzalo Higuain could pounce.
The Netherlands, for their part, struggled to get the ball to danger man Arjen Robben and failed to force Sergio Romero into a save before the half-time whistle sounded.
If the first half was tame, the second was even tamer. Argentina finally sprung to life on 75 minutes, however, when Messi spun his man down the right touchline but was felled. The referee played the advantage, allowing Enzo Perez to surge forward and cross for Higuain, whose first-time stab hit the side-netting.
After the contest crawled into added time, the Netherlands conjured up what was its best chance. Sneijder’s crafty flick sent Robben racing into the Argentinian area. The 30-year-old nevertheless took too many touches, which enabled Javier Mascherano to make a superb sliding block from his strike from point-blank range.
Shortly into extra-time, Klaas-Jan Huntelaaar replaced Van Persie. It was Louis van Gaal’s third substitution, eliminating the possibility of quarter-final saviour Tim Krul coming on should the game go to penalties and signalling the Oranje coach’s desire to go for it.
That his charges did. Robben sped in behind the Albiceleste defence, only for Mascherano to divert his cut-back behind, before the Bayern Munich player tested Romero’s hands with a fizzing 25-yard piledriver.
After 115 minutes, Argentina had their finest opening of the match. A long ball over the top bounced into the path of substitute Rodrigo Palacio, but he failed to generate sufficient power on his header to trouble Cillessen.
Both goalkeepers had had little to do in normal and extra time, but Romero did plenty thereafter to send the masses of Argentinians in Sao Paulo delirious.