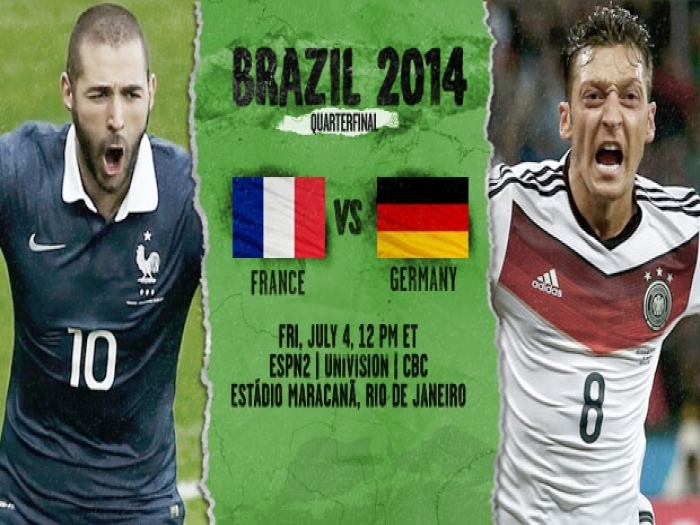 The quarter-finals are set to begin at Brazil 2014 with a pair of mouth-watering ties on the menu, European heavyweights Germany and France locking horns before the hosts tackle fellow South Americans Colombia.Germany's vast array of titles might give them the air of favourites, but Die Nationalmannschaft have struggled against France in the past, recording just eight wins to 11 losses and six draws in 25 previous meetings. Despite their long rivalry, the two neighbours have met only three times at FIFA World Cup™ level, though on the greatest stage of all it is Germany who hold the edge.
Les Bleus posted a swashbuckling 6-3 victory in the match for third place at Sweden 1958, but the Germans edged both their subsequent semi-final jousts, winning 5-4 on penalties at the end of a 3-3 draw in 1982 before prevailing 2-0 at Mexico 1986.This year, Germany kicked off with a 4-0 success against Portugal that set high standards they have since failed to maintain, Joachim Low's troops following up with a 2-2 draw with Ghana, a narrow 1-0 win against USA and a 2-1 extra-time triumph against Round of 16 rivals Algeria.
France, meanwhile, hit the ground running by sweeping aside Honduras 3-0 and alerted the world to their potential by downing Switzerland 5-2, before a goalless stalemate against Ecuador and a 2-0 defeat of Nigeria that owed everything to a pair of late efforts. They are now relishing what promises to a be a very open tie, with both sides prolific going forward and solid at the back – Les Bleus hitting ten goals and conceding two, while Germany have struck nine and shipped three.    As for Brazil and Colombia, their maiden World Cup contest will be the 26th encounter between the teams, A Seleção having won 15, drawn eight and lost a mere two – racking up 55 goals and allowing just 11 in the process. Brazil also remain unbeaten at home to Los Cafeteros, engineering six victories and three stalemates, while their opponents have never previously reached this far.
That said, it is not all doom and gloom for Jose Pekerman's charges. Although four-goal Neymar continues to prove his worth, the hosts are still not fully clicking, as evidenced by their 0-0 result against Mexico and a nervy Round of 16 meeting with Chile that went to penalties after a 1-1 draw.
In contrast, Colombia have caught the eye thanks to their fluid and effective style of play, while five-goal James Rodriguez has more than made up for the absence of injured star Radamel Falcao. Brazil will also be missing suspended midfielder Luiz Gustavo and have six players within a yellow card of a similar ban, including Neymar and Thiago Silva.
The matchesFrance-Germany, Estadio do Maracana, Rio de Janeiro, 13.00 (local time)Brazil-Colombia, Estadio Castelao, Fortaleza, 17.00 (local time)Did you know?New ground: For the first time in World Cup history, all eight group winners remain in contention at the quarter-final stage. In addition, an unprecedented five Round of 16 matches went to extra time, while a record 29 substitutes have found the net since the tournament began – a new World Cup benchmark that continues to grow. Goal bounty: The first ball has yet to be kicked in the quarter-finals and, already, all the old World Cup goal records are lying in tatters. No fewer than 154 strikes have been buried thus far at Brazil 2014, seven more than during the entire tournament in 2006 and nine more than at South Africa 2010. Kings of consistency: Germany are gearing up to dispute their 16th consecutive quarter-final since 1954. France, meanwhile, have not lost at this stage for 76 years, since they succumbed 3-1 to holders and eventual winners Italy in 1938. Third time lucky?: Brazil go into their tie desperate to end a run of two successive World Cup eliminations in the last eight. They suffered a 1-0 reverse at the hands of France at Germany 2006, before going down 2-1 to the Netherlands four years later.Young guns: Leading the adidas Golden Boot race thanks to his five goals and two assists, Colombia's James Rodriguez is enjoying a superb tournament. Aged 22 years and 11 months, he is also the fourth youngest player to have registered in four consecutive World Cup outings, with Teofilo Cubillas (21 years, three months in 1970) topping the list ahead of Hungary's Ferenc Bene (21 years, seven months in 1966) and Brazil's Pele (21 years, seven months in 1962).Suspended playersLuiz Gustavo (BRA)Treading the tightropePaul Pogba, Blaise Matuidi, Patrice Evra (FRA)Benedikt Howedes, Philipp Lahm (GER)Neymar, Hulk, Ramires, Thiago Silva, Jo, Dani Alves (BRA)Pablo Armero, Carlos Sanchez, Fredy Guarin (COL)Check it outFew match-ups can rival France versus Germany for sheer prestige, and the European powerhouses have served up some classic encounters in World Cups past. Relive their meetings in 1982, 1986 and even 1958 thanks to FIFA.com's video highlights.FIFA.com also spoke with Michel Hidalgo recently, and the man holding the France reins in 1982 shared his memories of that epic semi-final loss, while backing Les Bleus to shine this time around. Having scored in the 1986 rematch, meanwhile, Andreas Brehme took time out to present the view from the other side of the fence.Elsewhere, Pablo Armero has been speaking about his desire to get the whole of Colombia dancing when Los Cafeteros take on Brazil.On this dayCroatia shocked football fans everywhere on 4 July 1998 when their maiden World Cup campaign continued with a stunning 3-0 win against a transitional Germany side. Robert Jarni broke the deadlock in Lyon with a goal in first-half added time, before Goran Vlaovic and Davor Suker made sure of the outcome in the last five minutes.
Suker went on to finish the tournament as top marksman with six strikes from six games, opening the scoring in the 2-1 semi-final defeat by France and hitting the winner to seal a 2-1 victory against the Netherlands in the match for third place. As for Germany's Lothar Matthaus, he could console himself on having become only second player to dispute five separate World Cups, after Mexico's Antonio Carbajal (1950 to 1966).