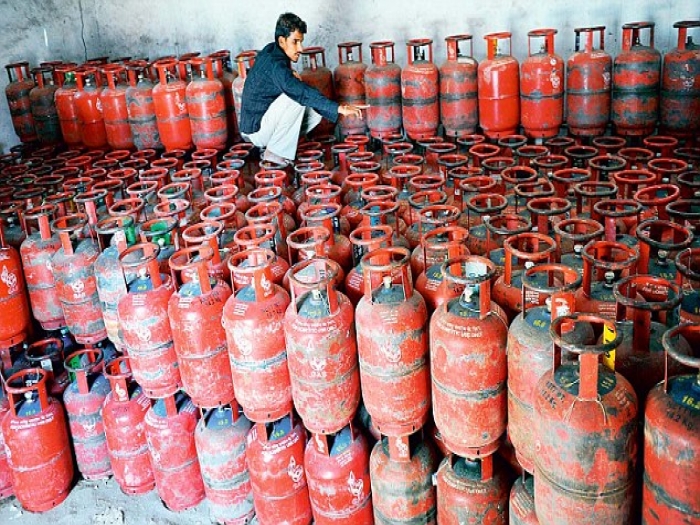 The Oil Ministry is likely to move the Cabinet Committee on Political Affairs (CCPA) soon with an expert panel recommendations of raising cooking gas (LPG) rates by Rs 250 per cylinder and kerosene price by Rs 4 a litre.
The ministry is preparing a draft note for consideration of the CCPA on pricing of diesel, kerosene and LPG, official sources said. Endorsing the previous UPA government's monthly 40-50 paisa per litre increase in diesel prices, the ministry is likely to propose that the monthly revisions may continue till the present Rs 3.40 a litre loss on the fuel is fully bridged.
After the diesel subsidy is eliminated during the course of the year, the ministry wants CCPA to authorise it to decontrol or free price of diesel as was done in case of petrol in June 2010. Since its decontrol, petrol rates are revised on 1st and 16th of very month based on average cost in the previous fortnight. Barring a few exceptions, petrol prices have moved in tandem with cost since then.

Sources said the ministry wants the CCPA to consider recommendations of an expert panel headed by former Planning Commission member Kirit S Parikh. The committee had in October 2013 recommended to the government that diesel prices should be hiked by Rs 5 per litre, kerosene by Rs 4 a litre and domestic LPG rates by Rs 250 per cylinder immediately to cut fuel subsidy bill by Rs 72,000 crore.
But as the monthly increases have led under-recoveries, or the difference between cost and retail price, falling below Rs 5, the ministry is unlikely to press for implementation of the panel's recommendation on diesel. Besides diesel, state-owned oil firms at present lose Rs 33.07 a litre on kerosene sold through the public distribution system (PDS) and Rs 449.17 on LPG, they said.
The Parikh Committee had suggested liquiditing all of the diesel subsidy within one year and was for restricting supply subsidised LPG cylinders to 6 bottles of 14.2-kg per household in a year. Currently, households are entitled to 12 cylinders of LPG on subsidised rates. The sources said the ministry is not taking this recommendation of the panel to the CCPA.
If rates are not increased, state-owned oil firms are projected to end the current fiscal with Rs 1,07,850 crore of under recovery or revenue losses. This will have to be met through a combination of government cash subsidy and contribution from upstream firms like ONGC.
The sources said the ministry is also taking to the CCPA the expert panel's recommendation of continuation of existing pricing principles for controlled petroleum products despite the Finance Ministry's objections. The Finance Ministry is pushing for refiners being paid the equivalent of rates they would have realised if diesel, kerosene and LPG were exported.
The export parity pricing (EEP), it feels, will cut its subsidy outgo by Rs 13,000 crore. After discounting the quality specification of fuel exported by private refiners, the difference between the EPP and currently practiced trade parity pricing was only Rs 108 per kilolitre or 1.5 per cent.

"What has been made public is Part-I of the report? It has been reported in the media that pages 112 to 167 are still not known. Is it because these pages contain some material which can be embarrassing to those in power in 1962? The first 111 pages having been made public, it is now necessary that the balance pages also be made public rather than allow public opinion be influenced by unauthentic sources."   The above paragraph is taken from Union Defence Minister Arun Jaitley's blog...

Anticipating major economic reforms in the maiden budget to be presented by the new Indian government, Corporate America has said it is ready to invest billions of dollars in India but the budget must match "pragmatism with unbridled enthusiasm". Through this budget, the Obama Administration, policy makers, corporate sector and economists in the US are hoping to see a strong sign of a the major economic reforms which were promised by Prime Minister Narendra Modi during his election...